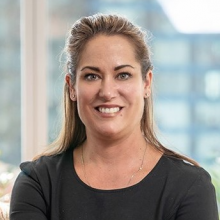 Anna Foat wants to live in a world where changing the status quo isn’t a wild dream, but an achievable reality.

An industry expert on sales, marketing and alliances, Anna joined RIM in 1999 pre-300 employees and grew with the company executing deals with IBM, Visa and Mastercard in her tenure. In 2011 when Blackberry had grown to 16,000 employees she left to join IBM as the Worldwide Managing Editor of MobileFirst Platform leading content digital marketing strategy.

In 2016 she was invited as the Executive in Residence for the first cohort of the Fierce Founders Accelerator at Communitech. She today works at one of Canada’s major insurers advising the chief transformation officer on the topic of digital transformation.

She earned a BA in English Literature from the University of Waterloo and now teaches Design Thinking at Western. She’s a best selling author on the topic of Design Thinking and was named BetaKits top 30 women to watch in tech. When she’s not hustling for the next deal or talking to entrepreneurs you can find her either sipping wine with friends or locked in a hot yoga class trying to find that elusive balance.

Short
Anna Foat loves the power of possibility and the passion of entrepreneurs. She’s worked at a start up, grown with one of the most famous Canadian scale ups (and subsequent crashes) and now works for a major financial services firm in Canada advising the chief transformation officer on digital transformation.

She earned a BA in English Literature from the University of Waterloo and now teaches Design Thinking at Western.

All Sessions by Anna Foat

In today’s world, customers are in the driver’s seat — as their need for digital transactions increase so do sales. Maximize customer satisfaction and loyalty while enhancing organizational efficiency with new self-service programs. Source practical tips to:
·       Reduce response time, and solve customer challenges more quickly and cost-effectively
·       Strike a balance between self-service and human interaction
·       Design an easy-to-use self-service portal with clear instructions and resources

Harness the power of self-service to boost efficiency and save costs.